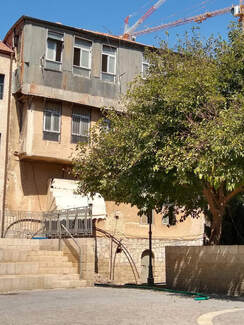 Even Yisrael
Even Yisrael was the sixth neighborhood built outside the walls and is considered the beginning of Nachlaot. Most of the neighborhoods in Nachlaot were built as courtyard neighborhoods. The houses were built as a frame around the central courtyard, like Bet David. They felt more secure, as the outer wall of the houses served as protection from outside. This was the typical style of building until the beginning of the 20th century. Inside the courtyard, you would find all the communal services:  There were all kinds of jews here. Ashkenazim, Sefardim, etc. Every language was heard in the street.
Mr. Yosef Aplotka said that this is where the Ashkenazi women learnt how to cook!
There was one four-story house, which was called the “Sky Scraper of Jerusalem” !!
“Even” “אבן’ in Gematria is 53, and that’s the number of apartments built here. 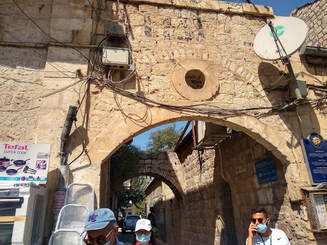 Sukkat Shalom 1882
The archway entering the neighborhood used to have doors. The courtyard was bigger than it is today. Later, more houses were built in the middle. This neighborhood was built for business.
Sukkat Shalom was named after Shalom Kunstrom, and from the phrase which appears in prayers: “ופרוס עלינו את סוכת שלומיך..."

Sukkat Shalom was looking for residents. 1882 was the year of the First Aliya. But most of the people of the First Aliya went to Moshavot - agricultural communities.
Yemenite Aliya / אעלה בתמר
Also in 1882, was the first Yemenite Aliya known as “אעלה בתמר” (quote from Shir HaShirim) meaning “I shall climb up the date palm tree”. The year 1882 is תרמ”ב, which is the same letters as “בתמר”.
A rumor was spread that Rothschild and Montefiore bought lots of land and were waiting for people to come settle the land. It was hard to live in Yemen, so many people left everything and made the long journey, leaving all possessions behind. When they arrived, they found out that there was not Rothschild or Montefiore were waiting for them. The Yemenites weren’t poor in Yemen, they were silversmiths, but they weren’t allowed to take any of their wealth with them. They arrived to a very poor country, and weren’t easily accepted by the local Jews, who weren’t convinced of their Yichus - heritage. They were dark-skinned, and spoke Arabic. They weren’t Ashkenazi, and weren’t Sefardi. It’s a very sad story. Many lived in burial caves in the kidron valley, and many starved to death. Some Christians helped them.
“Our Jerusalem” writes how they were overwhelmed by the Yemenite Jews, who dressed like Avraham Avinu, who looked like the most authentic of Jews. It took very long for Jewish communities to help support them. Sukkat Shalom was empty for a while, and so it became Yemenite.
The lucky Yemenites ended up in Jerusalem. Others were sent to Kineret or Rechovot or elsewhere in the country.
​​ 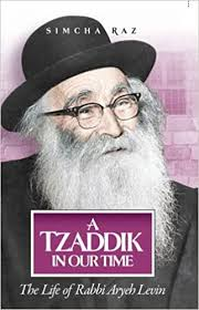 R’ Aryeh Levin 1885 - 1969
Rabbi Aryeh Levin lived at the edge of the Yemenite neighborhood in a tiny, modest home. He was loved by all and known as the “Rabbi of the Prisoners”, since he would go visit the prisoners regularly. Most of the prisoners weren’t religious, but since the Muslims and the Christians had a religious leader visiting, it was arranged for the Jews too. R’ Aryah Levin was the only Rabbi in the modern era, who was accepted by all.
An excellent book was written about his life story.  “A Tzaddik in Our Time”
There is a narrow alleyway called R’ Chaim Abulafia named after a Yemenite. The is a story that happened in this narrow alleyway: A young man, who had recently stopped wearing a Kippah, was coming through from one end and R’ Aryeh Levin started walking towards him from the other end. The young man was really embarrassed to meet R’ Aryeh Levin without his Kippah, but had nowhere to run or hide.  R’ Aryeh Levin got the feeling that he was trying to avoid him and asked him "are you trying to avoid me? Did I hurt your feelings?" The man was now even more embarrassed, but had no choice but to tell him the truth. And this was R’ Aryeh Levin’s answer: “I’m short and I can’t see what’s on the top of your head, and I’m not interested. But I see your heart, and you have a good heart. That’s what’s important!”
R’ Aryeh Levin was involved in uniting the people. The state wanted to award him with a prize “פרס לבטחון ישראל” but he didn't want to accept. They argued that every single member of the Knesset voted to give him this award, and he answered, “If I managed to unite the Knesset, maybe I do deserve it.” After his death, his home was turned into a Yeshiva, according to his wish.
Mazkeret Moshe, Ohel Moshe, Zichron Moshe,  Kiryat Moshe are all neighborhoods named after Moshe Montefoire. He did not have children, and he left money to his nephew, Samuel Sabbag, to continue his Chessed Projects. Samuel Sabbag was very concerned that his uncle should be remembered, and therefore named many neighborhoods after him. Samuel also added the name Montefoire to his own name.
​ 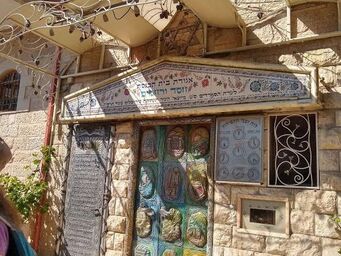 Chessed V’Rachamim - חסד ורחמים
This is a Sefardi Synagogue in the middle of an Ashkenazi neighborhood. The building used to be a pub. Yitzchak Armoza, was a Sefardi Jew, and a butcher living in the Sefardi neighborhood nearby. He was upset that there was a pub in a religious neighborhood. He was a large man, and one day he came by, kicked out the drunks, and asked for the owner. He asked him how much he wanted to sell the place for. The owner answered that it’s not for sale. But the large butcher was tough, and insisted on buying. He got his way, emptied out the pub, and brought bottles of water from the Mediterranean Sea, symbolizing a proper cleaning out, on all levels.
Inside, there is a drawing of the Kotel as a narrow alleyway, the way it looked in 1967. Between 1948 - 1967, many people who wanted to go to the kotel but couldn’t go because it was under Jordanian rule, would come here instead.

Note the metal supports outside the walls across the street - it’s holding the house together.
Eini Building / בנין עיני
People who lived in these neighborhoods were upset when the Eini Building was built. It blocked their view, air, etc. the leader of a Kabbalist Yeshiva here cursed the building, and for years to come, businesses in this building were always bankrupt, people got cancer, accidents kept happening, a toddler fell from a high floor, etc. In the 1980’s the Eini Family promised money to the Yeshiva and to charity, and together with R’ Mordechai Eliyahu, organized a טקס הסרת הקללה, “Removing the Curse Ceremony”!
​ 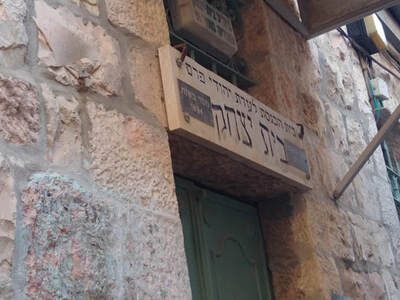 Neve Shalom
We walk quietly through a hallway, past the cute small Synagogue, down the steps and out on the other side. This was established by Persians, Kurdish, Urfa’ins (who claim they come from the real “Ur Kasdim” from Avraham Avinu)
The dates over the door read 1894 / תרנ”ב - Why is there a gap in the years?
Miri Shalev Kalifa named this Synagogue “Bet Yitzchak” after her grandfather based on this story.  R’ Yitzchak Kalifa was the Chief Rabbi in Persia. He was 80 years old in 1892, and wanted to fulfill his dream of going to the Holy Land. But how was that done in those days? Travelling from Shiraz to Eretz Yisrael was either through the Iraqi desert (very difficult and dangerous) or by ship through the Suez. As they passed Eden of Yemen, there was a terrible storm. R’ Yitzchak Kalifa got terribly sea sick and died. They decided to continue, with plans to bury him on the Mount of Olives. But the Turkish law didn't allow them to continue with a body on board, and they even kept two coffins on board every ship, just in case, which would be thrown overboard. The jews were horrified, but had no choice, and so they wrapped him in his Tallis, and put his Tefillin on his chest, and promised that if a miracle happened and their father would get a proper Jewish burial, they would build a Shul in his name. Months passed, and they move here, to Neve Shalom. One day, they received a letter from the community in Yemen. A group of kids were playing on the shore, when they saw a coffin floating. They opened the coffin and found the body wrapped in Tallit and Tefillin!  They found his name on his Tefillin which said, יצחק קליפה משירז. He was clearly a Jew, so they gave him a proper burial in Yemen, and contacted the Jewish community in Shiraz, Iraq, who then contacted the family in Jerusalem, who were shocked but were in such awe to hear the news! They left him buried in Yemen, and built this Shul after him.
1892 / תרנ”ב - was when they started the journey
1894 / תרנ”ד - was when the story ended!
Machane Yehuda Market /שוק מחנה יהודה
The map below looks like a ladder, between two main roads, the open market and the closed market.
Fifteen years ago, they let owners of bars and restaurants take over the area at night.
Some recommended shops to visit or do tastings are marked on the map.
​