Yemin Moshe from 1948 to Today
After the War of Independence, the Old City was conquered by the Jordanians, and Mishkenot Sha’ananim and Yemin Moshe were on the border. There were snipers and it was not safe to live here, so many people left. The area got filled up with new Olim from Turkey and elsewhere. For 19 years, they had a very hard life, living in 80 year old houses, with constant threat of snipers from Jordan.
In 1967, after the Six Day War, there are no more snipers. Teddy Kolleck decided that it’s time to bring life back to this area, in the form of Artists and Art Galleries. They offered the people living here (they didn’t own the apts here) new apartments in Katamonim. 20% of the people didn’t want to leave, but the Iriya forced them out (and in some cases, it got ugly), threatening that if they didn’t leave, they wouldn’t get an apartment for free. Five families took the risk, and they are still here. The whole area was renovated, and sold to artists for cheap, with the commitment of having a gallery here for at least 5 years. Most of those people sold the apartments after 5 years for very expensive prices. The original residents were very upset, and they are still very vocal. They gather here every Shabbat, and call themselves,”מגורשי ימין משה”.
Today, only 40% of the residents live here all year, the other 60% are foreigners who come to visit, so the neighborhood is very quiet most of the year. Sad.
​
Machane Yisrael 1865
Machane Yisrael, the second neighborhood built outside of the walls,  was built in 1865. It is not very well known today, because it was built privately, by poor moroccan Jews, on very cheap land. The ashkenazim were much more into writing books and documenting their accomplishments. The Sefardim didn’t record anything, and so it was forgotten. The book, “מוסד היסוד” was written by the ועד הכללי, an organization that gathered their resources together and built over 22 neighborhoods inJerusalem, and wrote down their memoirs. In Chapter 3, titled, בניין ירושלים, they claim that Nachalat Shiva was the first neighborhood outside of the walls, and the cornerstone of Newer Jerusalem!  According to them, Mishkenot Sha’ananim was only a hospital, but no one actually lived there, and Machane Yisrael didn’t exist. A later edition adds a footnote that there was a creature called Machane Yisrael, built by Moroccans, which wasn’t in older sources.
Ten years ago, permits were approved to knock down older buildings and build the tall buildings we see here today (which are also mostly vacant most of the year). Nothing was preserved, but they were forced to build this courtyard as a small memory of the community that was.
​ 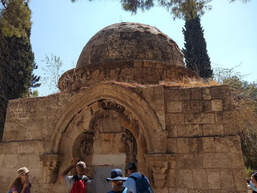 Rechov Agron
​Two pairs of Eucalyptus Trees line the northern side of Rechov Agron. Gaza Road used to run between the two sets of trees from Jaffa Gate towards Gaza. There was also Jaffa Road leading to Jaffa, and Hebron Road, leading to Hebron. In the 19th century, there was nothing else here, just a muslim cemetery near the Mamilla Pool, and the Tomb of a Sheikh, the Governor of Tzefas from the 14th century, who wrote in his will that he wanted to be buried in the Holy City of Jerusalem. Notice the Crusader-type architecture on his tomb, elbow Capitals, arch designs and vertical lines around the arch. 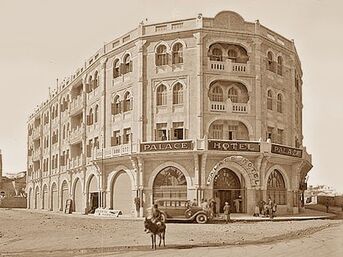 Palace Hotel
After the bloody Jaffa riots of 1921, the High Commissioner of Palestine, Herbert Samuel, established the Supreme Muslim Council to supervise the Muslim affairs under the British Mandate. Haj Amin al Husseini was elected as the first Grand Mufti of Jerusalem, and in order to raise the status of Jerusalem in the eyes of the Muslims, his first project was to renovate haram el sharif (Temple Mount). Next, he built the Palace Hotel, wanting a luxury hotel for visiting elite of the Muslim and Arab world. It was built here, on Agron Street, right next to the Mamilla Pool and Muslim cemetery. Haj Amin al Husseini wanted to complete the hotel as quickly as possible, and most importantly, to open before the nearby King David Hotel opened its doors. While they were digging, they came across some human remains, probably part of the muslim cemetery, but Haj Amin al Husseini asked the workers to secretly rebury them elsewhere and continue building without delay! He was scared that his political rival and Jerusalem Mayor, Rajib a Nashashibi would order a cease work order. The secret did get out, and caused a bit of a ruckus. Nevertheless, the Palace Hotel opened its doors in December 1929, with 145 rooms, and unheard-of luxuries such as indoor heating, private baths, telephone service and elevators. In 1931, the even more lavish King David Hotel opened its doors. The Palace Hotel couldn’t compete, and was forced to close down four years later.
The Hotel was built in typical Arabic architecture, merging Greco-Roman, Renaissance, Gothic, Romanesque, neo-mauresque and Mamluk architecture.
One of the original contractors who built the hotel, Baruch Katinka, was also a Hagana member, and he planted listening devices in the building, and that’s how the Hagana found out about the plan of the Peel Commission. This information convinced the Zionists of the urgency to claim as much empty land as possible, and began to build the famous “Tower and Stockade” settlements everywhere.

In 1948, The Palace Hotel, Al-Husseini’s building fell into Israeli hands. It was taken over by מדינת ישראל. See picture of Arabic inscription on the building with the sign of מדינת ישראל!
​
In 2006, the Reichman family of Toronto bought the hotel, and began to renovate it, while preserving the original historic facade of the hotel. The new, five star hotel, Waldorf Astoria finally opened its doors in 2014.
​ 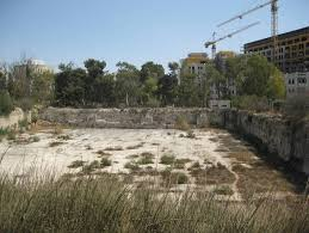 Pool of Mamilla
Maybe it was named after a Byzantine Princess named Mamilla, maybe Maim a Alla - meaning “Water from G-d”.
This is a very impressive water source. It seems like it should be Second Temple, from the reign of King Herod, like Solomon’s Pools, next to Bethlehem, but archaeologists decided that it is Byzantine. It is a bit disappointing, but still impressive.
​When the British came in 1918, they looked for better water sources for Jerusalem, and for the first time, were able to bring water from somewhere lower than Jerusalem, Ein Mabua, because they brought pump technology to the country.
Nachlat Shiva 1869
Walk out of the park on Hillel Street, cross over Hillel, and up the street behind the Hillel Parking Lot, and turn left into FOZ (Friends of Zion) vaulted arch into Nachlat Shiva, the third Jewish Neighborhood, established in 1869.
FOZ Museum is a great museum, run by a Christian company, documenting Christians who helped the Jewish people throughout history.
“Nachlat Shiva” - means inherited the land of the seven. The Ashkenazim documented everything, but the Sefardim were too busy building that they didn’t document anything. It was established by the SEVEN people. Yosef Rivlin was one of the seven, who came here by himself for 32 months. (His wife didn’t even agree to come with him) and was the head of the committee for building here. There were 2 hotels outside the walls. One if you were coming from the south, and one if you were coming from the north. Usually, Khans were built in between cities. Why did they need a khan so close to the city? Because if you arrived, and the gates were already closed, you stayed at a khan overnight. Eitz HaZayit Hotel on Nablus Road has the remains of an old Khan. Here, they built a hotel to convince people to try it out and come live here. They also built a Shul / Synagogue here. The sign says it is the first Synagogue outside the walls?!?! We know that there were synagogues in Mishkenot Sha’ananim and Machane Yisrael earlier, but this sign gives them a lot of money, so they don’t correct it!