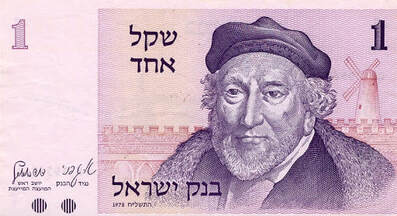 Jerusalem Before 1860
Until 1860, Jerusalem residents lived only inside the walls.
In the beginning of the 19th century, lots of new people come to Jerusalem: It’s still during the Ottoman Empire, and Jews were not allowed to buy property. They could only rent, and sometimes people had to share tiny apartments because of lack of available apartments. The crowding was terrible, which brought plagues like cholera to spread, and many people died.
The thought of leaving the walls, however, was very scary. There were animals and robbers.

After the Crimean War (1850’s), there were new rules for treating non-muslims, which allowed non-muslims to buy land, and capitulations which meant that European christian countries started buying land. The Ottoman Empire was crumbling, and the Crimean War left them with huge financial difficulties, so they needed money. And if selling land, charging taxes, and allowing churches and synagogues to be built would bring in money, then that became, not only acceptable, but desirable.
The Greek Orthodox Church bought huge amounts of land outside the walls, areas that would eventually become Rechavia, etc. Much of this land was bought from the Arabs of the Lifta.

Jewish neighborhoods spread to the West of the Old City. Arab families also start to build outside the walls, mostly to the north of the city, and not in groups. Individual wealthy families begin to build large houses outside the walls as vacation homes.


Moses - Moshe Montefiore
Moses Montefiore, was born in Italy, but lived most of his life in Rumsgate, England. His first business was in lamp posts based on gas. He was the first to light up the city at night. He was even given the title “Sir” by the Queen. He became very wealthy through his various businesses, and stopped working at the age of 40. (and he died at the age of 100! (and nine months)
Montefiore​ came to visit Jerusalem in 1837, and he was shocked by the terrible conditions.
Montefiore was the first to think of building communities outside the walls, but was unable to do so, until after the Crimean War. In 1855, he bought the piece of land that would become Mishkenot Sha’ananim and Yemin Moshe. It seems that his original plan was to build a hospital there for the poor, but that never happened, probably because Rothschild already built a hospital.

Montefiore understood that the residents of Jerusalem were scared to leave the walls because of safety (robbers and animals) and because they would no longer be entitled to the Chaluka, the meager charity that was collected from Europe which supported only the Jews in the 4 holy cities, but if they left Jerusalem, they’d have to fend for themselves. How would they feed their children? 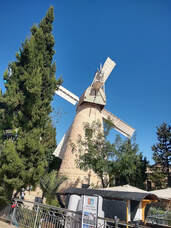 The Windmill
In 1858, Montefiore first built the windmill, on the estate which he called “Kerem Moshe v’Yehudit”, the “orchard of Moshe and Yehudis”. The neighborhood itself would only be built in 1860. The windmill would provide jobs, and the security that the residents would have access to cheap flour to feed their children. Montefiore placed an advertisement in the Jewish Chronicle (in England) for a religious Jewish miller for the Holy City of Jerusalem, because he understood that the people needed someone they would trust, someone religious who was accustomed to the laws of Trumot and Maasrot, among other Halachot. When he didn’t find anyone suitable, he chose someone from Jerusalem, and brought him to England to be trained.
He also built a wall around the new neighborhood, so that they would feel secure, and renamed the new neighborhood Mishkenot Sha’ananim / משכנות שאננים, which means the houses of people who are not afraid.
The neighborhood remained empty for the first three years. What finally convinced the people to leave the city? At first Montefiore set a very low rent for the apartments. When no one came, he offered the apartments for free. When still no one came, he offered to pay the people who came, and even transferred the apartments onto their own names in Tabu! 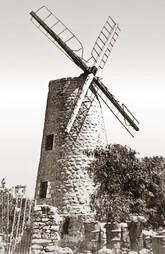 There was a well-known rumor that the windmill was only used for less than one year! This rumor started from millers inside the old city who were jealous, because a mill which turned via wind would be much cheaper to run than their mills which were operated with donkeys. The millers inside the walls sent someone to curse the windmill, but nothing ruined it. It seemed to be guarded.
​Other rumors of its disuse were based on supposed theories that there was no wind here, or the Israeli wheat was too tough for the British mill, or that the maintenance was too expensive, needing to bring the cylinders from England.
But, the windmill worked for approximately 20 years. It was very successful! It is near the watershed line, and usually gets lots of wind. Also, the top cap rotated in order to catch the wind in whichever direction it was coming. It played a big part in convincing the people to leave the walls.
They stopped using the windmill eventually when the German Templers brought steam machines, which were much more reliable, (although a bit more expensive.) 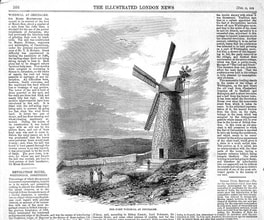 In April 1948, we were in middle of the War of Independence, but the British were still here. The Hagana built a military post on top of the windmill. The British High Commissioner saw this from his headquarters on Armon Hanetziv, and sent three people to send them away. When they didn’t listen, he sent instructions to blow up the windmill. The British soldiers came, and saw a sign on the structure of the windmill, that it was built by a Moses Montefiore from Rumsgate, England. These two soldiers were from Rumsgate! They saw this as a message from g-d, and refused to blow it up. Instead they only destroyed the cap of the windmill with a small amount of dynamite. After the British left, the IDF rebuilt it.
The windmill was deserted for many years, until it was renovated and remodelled in 2013, and was part of a small exhibit on Moses Montefiore. It was again used to produce flour, but not for long… It closed again, and recently opened as a wine shop and hosts a 5 minute film inside about the history of the windmill and the neighborhood. 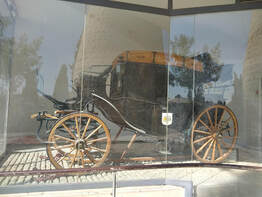 Carriage
The sign by the carriage says that Montefiore used this wagon as he travelled around the country when he visited from England. This is not possible, as there were not yet roads that could have accommodated such a heavy wagon! it weighed 4 tons! The first road was built for the visit of Franz Joseph’s visit in 1869, and then for Kaiser Wilhelm in 1898.

This carriage was actually never used in Israel, it was used in Vienna. In 1885, Hechler, a Christian Priest who loved the Jewish people, opened a museum in Vienna. In 1909, everything was taken outside for a garage sale. Boris Shatz from Betzalel School of Art was very interested in this piece. He convinced the zionist leader to collect money to buy it, and brought it here. It was brought to Jerusalem with horses in 1910, and was displayed in Bezalel School of Art until 1967, after the six day war, (and the border moved from there), it was brought here and put on display next to the Windmill in Montefiore’s honor.

​Observation Deck
We see how close this is to the Old City, just across the valley of Hinom. We see the Old City Wall, halfway down, and see how it is more logical that it would have continued all the way to the south end. It was only cut later.
We see Dormition Church, The Greek Orthodox School for Priests and Monks and Gobat’s School, which was built in 1852, and was the first building outside the walls, before Mishkenot Sha’ananim.
We can see where the Hinom Valley meets the Kidron Valley, by Siloam. 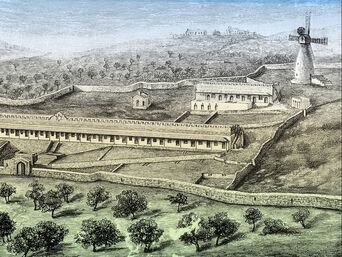 Mishkenot Sha’ananim 1860
1858 - The windmill was built
1860 - The long house was built and the wall around it, with a gate in front.
There was a tiny house in the middle, but we’re not sure what it was used for. Maybe a guard house?
The short house was built after.

In 1865, there was a terrible plague of Cholera in the Old City. It seemed to pass over Mishkenot Sha’ananim because of the better hygiene conditions and absence of crowding. This accelerated the demand for apartments in the area and the “Short House” was built to fill that demand. 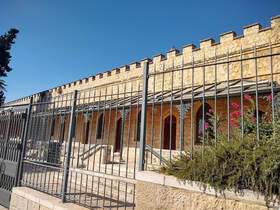 As we walk down the steps, we pass the wall surrounding the city, and we see both the short house and the long house. Note the Hebrew letters on top of every door. From the structure of the front of the building (door, window, door, window, etc.) we can see how small the apartments were!

The metal designs of the pergola were brought from Rumsgate, England.
At some point, every two apartments shared a third apartment in between, making 2 apartments out of three original ones. One apartment was used as a Yeshiva, and there were two shuls (Sefardi and Ashkenazi) and a pharmacy. Sefardim and Ashkenazim never mixed before. Montefiore encouraged them to integrate. He gave a reward of 100 gold coins to mixed marriages!
Recently, it was turned into a hotel. 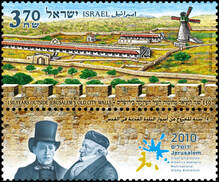 The dedication sign says that משכנות שאננים was established with money from Yehudah Touro, of New Orleans, under the supervision of Moses Montefiore.
In 2010, there was a celebration of 150 years of leaving the walls of the Old City, and they put out a stamp of Mishkenot Sha’ananim with two men, the older one is Moses Montefiore, and the younger one is Yehuda Touro. Yehuda Touro had heard of the projects led by Moses Montefiore and in his detailed two volume will left $50,000 (a huge amount of money in those days) to fund the construction of Mishkenot Sha'ananim and help the people of Jerusalem. 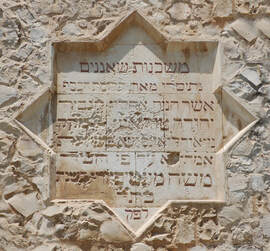 The Front Gate
The picture from 1863 shows the gate more to the south. The picture from 1890 shows the gate centered in front of the long house, like it is today. Why was it moved?
When Montefiore visited in 1866 and saw firsthand this project for the first time, he was shocked and extremely upset to find the plaque giving credit to himself and his wife. The money had come from Yehudah Touro and he intended to give credit where credit was due. Seemingly, he closed up that gate where that plaque was built, and opened a new gate placing a new dedication plaque!

Old Hebron Road and Lower Aqueduct
​The ancient aqueduct came along here and crossed the valley on a little bridge. The old Hebron Road followed the same route as the aqueduct, and passed right by these neighborhoods, west of the Valley. We see a piece of the Lower Aqueduct.